I will blog about this later (after having already blogged once about it):

Although there is clearly a link there as to why I found this article interesting, notice the point of the "long tail" business. IE: is the marketplace as a physical structure now disappearing??? ARe commercial centers at the end of their life?
0 comments Posted by Barry Floore at 12/04/2007 01:09:00 AM
Labels: boston, gay ghetto, GAY STUFF, heteronormativity, Northside

Uruguay was the first country in Latin America to approve civil unions for gay couples.

That's right, folks. Uruguay beat us to the punch; oh, and made a punch line out of our country.

2) HIV infections rising among gay men -- 13% increase between 2001 and 2005 (One day I will recap my vent about the "AIDS numbers game," but the point is there... Men who have sex with men -- MSMs -- are the number one group getting HIV in this country)

5) Bush asks for doubled funding for fighting world AIDS -- that would still only be $30billion, so just under a dollar per person infected... thanks, Shrub, your kindness knows no bounds

6) Democratic presidential candidates pressed to end AIDS -- supporting crazy ideas like $50billion in world funding, allowing needle exhange, comprehensive sex ed, and allowing HIV-positive foreigners to visit our country.. thanks, guys, these don't seem all that "activist" to me, I'm disappointed it took this long

7) Resurrection of virus may help us understand HIV -- using a form of HIV that was once found in ... rabbits?

8) World Health Org recommends circumcision -- after it was found that, yes, in fact, men who are circumcised are less likely to catch HIV, which is something most African prostitutes already knew

9) Washington, DC tops the list of infected cities -- to the tune of 1 in 50 people being infected (and, to add on, it is estimated, per other sites, that 1 in 7 black men in that city, I believe)

Who thought we would bring out a record crowd and raise a record number of bucks for Caracole ($3100!!!!! -- http://www.caracole.org/ and also http://www.isqccbe.org/ -- our sponsoring drag troupe). What a great night :-). 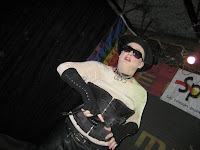