HEY GUYS. THANKS FOR STOPPING BY. I'M SO GLAD YOU LIKE THE PICTURES ON THIS BLOGPOST. PLEASE TAKE A FEW MOMENTS TO CHECK OUT MORE OF MY SITE. THANKS!!!!!!! :-)

I am officially placing a complaint in with Speedo's new LZR Racer, the new bathing suit -- of sorts -- for the Olympic swimming team.

First of all, I think it is unfair that if we cannot allow disabled people with prosthetic limbs to compete simply because the limb gives them an "unfair advantage," then I think this kind of body modification should be wholly and completely wiped from the competition. Beijing is allowing the Speedo suit, but baring Mr. Pistorius???

And besides, this is probably the unsexiest outfit of all time. For the love of god, we have relied on Speedo to provide us sexy nearly naked swimmers for years. This one, at least, provided us with some contours:

(Ha. Someone just pointed out that this is clearly a Nike suit -- Thanks for that :-))

What is this new suit -- if I wanted to watch a track runner, I'd turn the damn channel. I watch swimming for the near-naked boys. Does it seem, though, when comparing the women and the men in the new suits that they are striving for -- *GASP* -- androgyny? Are we trying to de-sexualize sports?

I object, Speedo. And to object, I'm going to post some pictures of men in speedo's, and let the copyrights be damned. 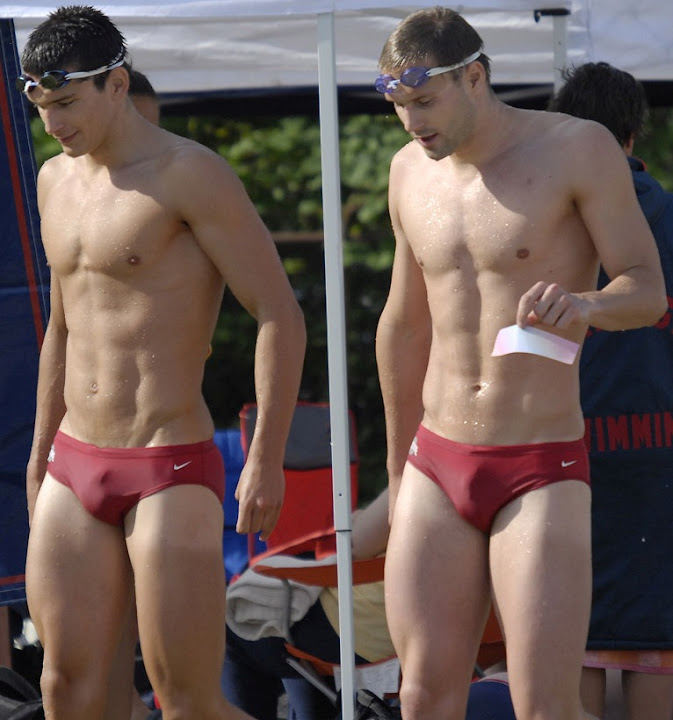 I mean, really, how can speedo give this up.

But seriously folks I think the double standard between the runner and the swimmers need to be called into question. It is unfair and silly that we would allow this kind of body modification, and not the kind that is required for the normal, everyday living.

Especially when the LZR Racer (that new speedo suit) has been proven to shave off time.

PS And I'm really really excited that I got to make a Speedo's tag -- HA! -- but it's also the first Olympics tag, which I feel will be coming up more and more... really, I do think we'll be talking more, especially with all the supposed controversy. GASP! Did she just say supposed? But what about Tibet? We'll talk later kids.
Posted by Barry Floore at 4/22/2008 03:24:00 AM
Labels: GENERAL STUFF, Olympics, Speedo