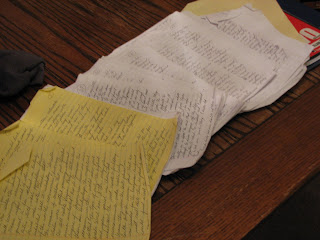 Why post a picture of handwritten pages? 112 of them to be exact.

I pulled my book back out today. It was sitting in piles around my still disastrous room. And now it's in one place with brand new, empty pages in it to be written it.

It's a small step, and I'll give you a small preview from page one:


It took just a five days for the oceans to lose their identities -- the continents of the Earth becoming over sized islands in a massive unified world of water. The oceans spread as far inland as Kentucky -- entire states, whole population buried under water. Sharks now inhabited Wall Streets -- swimming the halls of world's economies, devouring the remains of millions that just floated by. Whales were spotted spawning around the hills of Rio de Janeiro, watched by the outstretched hands of Mary as if blessing the next great flood. The Empire of Japan was no more than an archipelago, the mightiest economy in the world now just dotted the water with only the tops of the highest peaks. Word has it that the only places and peoples spared were those that inhabited the most remote and forbidding environments -- made habitable only because they were the last places on Earth. An evacuee joked that he was headed for the Amazonian rain forest -- great real estate, he laughed in the maniacal way of someone who was crazed for something. If he could find a boat to make it. He was going to make his way in a world where the dictates of capitalism were now tenuous and suspicious, a lost precept where the need for more left us wanting the very basics of survival. Every inhabitable place left was being land-grabbed by pioneers who had never expected to leave their homes. They were suburbanites traipsing through a mysterious and lost land.

Sitting on my porch, looking down at the packed street below -- evacuees trying desperate to make it somewhere, everyone going uphill and the downhill lane empty save for a few abandoned vehicles and the occasional brave soul -- I praised my own salvation. The gun I had pilfered from a neighbor's house moments after they had left protected my acre -- a full acre! now a true luxury -- from unwanted intruders and would-be squatters.

Except here. Here, the neighbors were close, and we were watching and guarding and protecting. Together, we would hold our own and hold our hill, and we would survive.

Clearly it's a first draft, but it's not half-bad, actually. I got stuck last time. I wrote myself into a corner and I think I found a way out.