Look what I found!!!! I'm not saying you were a liar, I just had never seen it. Forgive the weird shot -- kinda arty, really -- but it was raining, and I finally had my camera on me.

For those who don't follow, Queen City Survey had posted about the Gwynne Building downtown on the corner of Main and 6th. And, as my bus stop is literally half a block up, I was shocked I had never seen it. So I called him a liar and promised that I would publicly post a picture of it when I had seen it! :-) Here it is -- the Gwynne Building! 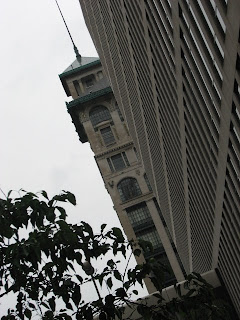