One of Oxford's BEST performers, Coco Bliss, arrived at On Broadway this evening, which coincided with a fierce birthday celebration we had for Vivica LaCroix (another Oxford performer).

1) On Broadway was a little slow, though Brooklyn Steele-Tate maintains her rightful place as one of the best hostesses in town. Yves St. Michael from Lexington has some fierce outfits and a great southern drawl, but I think the little tiny stage at OB's scared her. Coco, of course, was fierce. Saw Santana Storm, who informed me she works weekends now so we won't see as much of her. Miss you baby. 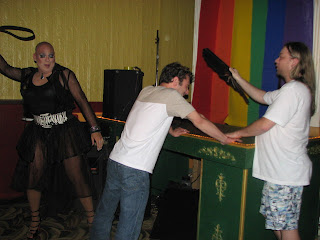 Brooklyn spanking a birthday boy. Mama had to lose her hair and earrings.

2) Ended up at the Dock, the dirty dirty Dock :-) that we all love. Jessica Dimon and Bella Dolce finishing one of their famously long shows -- ended at 1:30? cut it short, girls we want to DANCE -- and I don't think a group number to Seasons of Love is the best way to end a show. But Jessica is always amazing, and everyone should vote for her on RuPaul's drag show, Drag Race, so that she can be seen by millions. Caught Bella after the show; we swapped phone losing stories, but it was nice to see her. Best part: seeing Mykey back behind the bar. Oh, and I saw Cassandra Mills-Best, my local fav performer, out of drag and she gave me the run down on her FIERCE schedule all over the midwest, which makes me very happy for her. 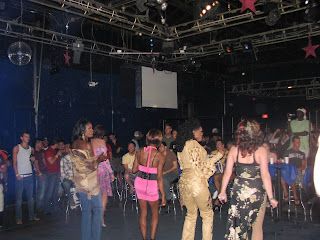 End of the Dock show. Does it seem like even Friday nights at the Dock are slow these days?

3) No alcohol -- lots of Red Bull, so I'm awake. But there is a boy sleeping in my bed upstairs. This is my version of whispering in the phone in the closet. 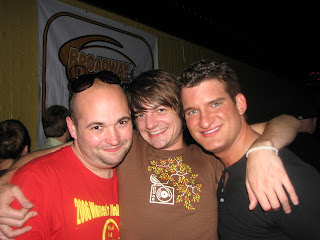 Queer Cincinnati, the Vinyl Polis, and Vivica LaCroix, out of drag. Don't kill me, darling! 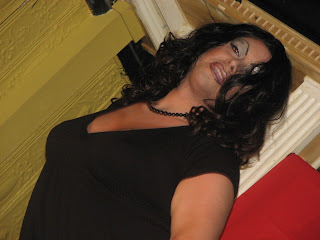 I met Brooklyn last weekend for the first time at Shooters out of drag. I was like, "You look familiar." To which he then told me who he was. Not sure if he looked familiar though because of his entertainer abilities.