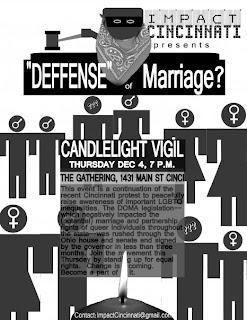 Cincinnati, Ohio -- IMPACT Cincinnati, the activist network that organized the equal marriage protest at City Hall on November 15th, will be holding a candlelight vigil on Thursday December 4 at The Gathering Church (1431 Main Street, Cincinnati, www.thegathering-church.org) at 7:00 p.m. The event will be dedicated to those who are still denied equality under current Ohio statute, and those who have been negatively impacted by discriminatory laws.

The event is set to kick off three months of activism and awareness building, marking the passage of Ohio's Defense of Marriage Act (DOMA) between December 2003 and February 2004. The act, sponsored by Cincinnati state representative Bill Seitz, was passed in the state House of Representatives by a margin of 73-24 and would later be signed into law by then-Governor Bob Taft. The state statute was later reinforced by a state constitutional amendment, approved by voters in 2006. IMPACT Cincinnati believes that public perception has changed dramatically since 2003 regarding LGBTQ persons and that there is a growing consensus amongst Ohioans to grant equal protection for same-sex couples in the state, and that continued visibility, dialogue and education is the only way to continue that trend.

The vigil on December 4 will be the debut the local WhiteKnot campaign. Gaining national prominence immediately following the JoinTheImpact.com protests on November 15, WhiteKnot.org has spearheaded a movement for people to wear a white ribbon tied in a knot as a show of support for equal marriage. From their website, "The White Knot is the symbol for marriage equality. It takes two traditional symbols of marriage -- white and tying the knot -- and combines them in a simple way to show support for the right of gays and lesbians to marry."

Local organizers for IMPACT Cincinnati are optimistic about future events after the tremendous success of their City Hall protest. Aside from the vigil, plans are in the works to preview the movie MILK, set to be released in Cincinnati on December 12th, travel to Washington DC to be visible Midwest activists at the Obama inauguration, participate in several local and regional LGBTQ conferences, and take a regional leadership role in a national protest planned for June of 2009.

IMPACT Cincinnati believes that true LGBTQ equality will only be achieved when every interested person has the opportunity to engage and participate in their wider movement and community. IMPACT Cincinnati, a grassroots network of community activists, strives to energize LGBTQ and allied people in Greater Cincinnati, link dedicated volunteers to a wide range of opportunities to generate change, and supports the efforts of local organizations working for equality. All are welcome.