Death in the Family: 2 years on 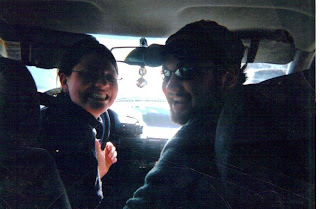 2009 Addition:
Two years ago, I wrote this, and I wondered why I delayed this year. I suppose, as time goes on, we feel it less; it hurts less; perhaps it even means less. But I mark Katie's death as the beginning of a long and awful tumble that left and indelible mark on my conscience and on my person. I don't blame her, at all, but I take death very strangely, and the guilt I felt about Katie's death is still.. raw.
In some way, I've forgiven myself, but it's good to continue to remember people that have blessed our lives, and left our lives.
I still miss you, Katie.
---
2008 Addition:
I wrote this one year ago yesterday. . . I'm going to repost it every year.

There's a lot of things people don't know about me -- even my best friends are not privy to parts of my history that I doubt they even know existed. It's funny -- no one in my senior year ever asked "What have you done for the last four years?"

This struck home, because, since then, I left them behind. Most of them, actually. And I don't know why it happened, but it did. They were good years, with wonderful people and fun times... great stories, if you ever want to know.. but based on how they ended, I think I just left it all behind.

I lost a friend this week.

Her name was Katie Rosby. On July 4th, they were shooting off fireworks in Cleveland and their neighbor, a fireman, had gotten tired of the noise from the house and came and killed three people -- two boys, 24 and 30 (one of which is the brother of Katie's best friend), and Katie. Shot Katie in the back. She died on the scene.

It's been a year and a half since I last talked to Katie and two things strike me as interesting:

1) I rearranged my house this weekend, and I found gobs of pictures of her and me, framed a few and put them up, thinking, "I need to call her soon."

2) The last conversation we had -- in front of the Papa John's on Hamilton Ave in College Hill -- ended with her saying "I don't care if we only talk once a year, so long as you answer when I call, and that I know you're always there."

I was always here, had she called (I hope I would have been). I just never called her. Her mother called me and said that they just wanted to tell two people -- our friend Dustin and me -- because, "even though you two rarely talked, she thought the world of you." I have since been told by her best friend (whose brother has passed) that, even that night, she told a story about me.

I can't believe it's been a year and a half since I talked to her.

I kept saying I would call.

This is so Sunday-afternoon lifetime drama. So "Cat's in the Cradle."

But I can't believe she won't be there the day I decide to finally get the cajones to call her, apologize for being a bad friend, and then act like nothing had happened.

Katie Rosby had one of the most beautiful smiles ever, and she always laughed. She was easy to make laugh. Those are the qualities I cherish in my friends. And I left her behind.

And now she was found dead with her friends in the driveway of some house in Cleveland, shot because the fireworks were too loud on July 4th.

And I didn't have the strength to answer her mother when she asked "What am I supposed to do now?"

People will criticize me for posting this, but I live my life in public; I will grieve in public too.