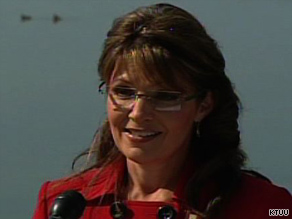 Sarah Palin has resigned as governor of Alaska. Absolutely no one one knows why, though the assumption is so that she pursue her national political interests in 2012. I am going to make a guess: shit is about to hit the fan for Ms. Palin for reasons as-yet-disclosed. Why do I say that?
Because, if you want to be President, you don't jump out of your post three quarters of the way through to seek the Presidency until long after you've declared. That's bad PR and makes you look like a flake. Truly. Something is simmering that has not hit the national media yet -- another scandal? another child pregnant? a paramour? perhaps more corruptions charges? -- and we're just going to sit back and watch it go insane in Alaska.
But the DNC said it best:

"Either Sarah Palin is leaving the people of Alaska high and dry to pursue her long shot national political ambitions or she simply can't handle the job now that her popularity has dimmed and oil revenues are down," DNC spokesman Brad Woodhouse said.

"Either way, her decision to abandon her post and the people of Alaska who elected her continues a pattern of bizarre behavior that more than anything else may explain the decision she made today."

Seriously, Alaska, you've got to do better on the national stage. If this is the best you have to offer, I think we're all vastly disappointed.

Regardless, good-bye, Sarah Palin.
And here's her press conference -- weird:
On the flip side, do you think this will be enough to remind queers why we elected Obama and not McCain Palin?

There seems to be some great commentary going on about this out there. From Nate Silver:

Palin is the most Bushlike of all the Republicans who have emerged as contenders for the national ticket: the smirkiness, the smugness, the regional accent (although Palin's, I assume, is not feigned), the malapropisms, the contempt for media (both the people who cover it and their mediums), the express deference to religious faith, the occasionally undeniably likable moments of joviality and regular guy/gal-ness, the tendency toward self-dealing, the bulldog/barracuda mentality, the comfort in one's own skin (Palin was crippled when she lost hers late in the campaign), the (apparent) preference for isolation in [Wasilla, Crawford], and last but not least, the no-holds-barred, no-apologies conservatism.

And sure, some of this is complicated by the fact that Palin is a woman, and a very attractive woman. Would Palin be resented to the same degree by (some) liberals if she looked like Susan Boyle? Well ... maybe not. But would she have been picked for the national ticket? Well ... maybe not. But this has less to do with Palin herself and more to do with the manner in which she was elevated to the national stage. Liberals believe very deeply in the idea that life ought to be meritocratic. Palin didn't seem to have earned it, especially in comparison to John McCain and Barack Obama and even Joe Biden who had such compelling life stories. To a lot of people (not exclusively liberals; Kay Bailey Hutchison's contempt for Palin was obvious), it felt like another case of the pretty girl getting the promotion. If Palin wins the nomination on her own in 2012, this case will fade, and in turn so should some of the resentment.