Media Materials for This Weekend. 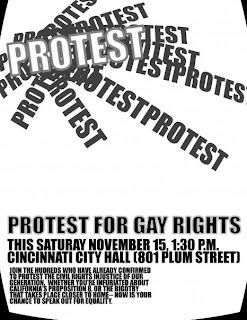 Cincinnati, Ohio -- A protest in favor of equal marriage will occur at Cincinnati's City Hall on Saturday, November 15 at 1:30 p.m. Local students, activists, and community members lead this event as part of a day of national protests in reaction to the passage of Proposition 8 in California, re-banning equal marriage in that state.

The local movement is being organized by Cameron Tolle, a junior at Xavier University and Vice President of the Xavier LGBTQ (lesbian, gay, bisexual, trans-identified, queer/questioning) Alliance, with the assistance of students from the University of Cincinnati and Miami University, along with several community members. Organizers state that the goal is not to overturn Proposition 8, but to create a national movement and create awareness for the effects that anti-gay legislation has on the local community. The protest will occur in conjunction with other groups from around the country at the same time as part of an initiative launched by JoinTheImpact.com; local organizers are in contact with many of these other coalitions as a way of building unity. In the first two days of organization, almost 300 people have stated they will be in attendance; 500 people are expected to attend the event.

"Last week, voters in California, Florida, Arizona and Arkansas allowed hate to infiltrate into our political system and classified the LGBTQ community as second-class citizens," Tolle says. "We cannot sit back and watch this happen. We have to let our communities know that we oppose hatred under the law in all forms. In Ohio, we live in a state that has already declared inequality by banning equal marriage and failing to include crimes against LGBTQ individuals under state hate crime laws. We cannot let this hatred under the law perpetuate any further."

JoinTheImpact.com is a national initiative that was created in reaction to the anger felt by many who believe in equal marriage rights after the passage of California's Proposition 8. It is a loose coalition of activists and organizations who seek to bring positive change in the fight for equality. The movement, less than a week old, is drawing hundreds of thousands of hits a day to its web sites. Almost 40 localities have announced protests in correlation with the initiative. More are expected to join in the coming week.

According to the website, the goal is to "come together for debate, for public recognition, and for LOVE! ... [to] move as one full unit, on the same day, at the same hour, and...show the United States of America that we too are UNITED CITIZENS EQUAL [sic] IN MIND, BODY, SPIRIT AND DESERVING OF FULL EQUALITY UNDER THE LAW."

Local organizers are hopeful that the protest will spur discussion and movement towards positive change in the Ohio-Kentucky-Indiana region. Ohio, Kentucky, and Indiana all currently have laws banning equal marriage rights; Ohio and Kentucky have constitutional amendments, passed by voters in 2004, to the same effect.