Updates, Press Locations, and a Protest 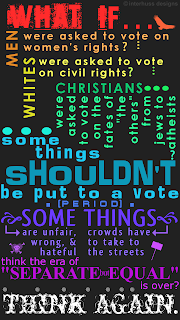 Make sure you watch Fox19 tonight at 6:30pm for an interview with "fearless leader," Cameron Tolle!!!!!

WHO: LGBTQ People and their allies, Impact Cincinnati, JoinTheImpact.com, and Margaret Cho

WHAT: Protest for Equal Marriage and Against Proposition 8

WHERE: Cincinnati City Hall, 801 Plum Street (Parking is available on city streets, please do not park in the Lloyd Library or City Hall lots and read the meter and pay if you have to!)

WHY: Let the country hear our voices together. Let them see that we are a strong, adamant, and powerful community that deserves equal rights, and CAN’T BE DEFEATED!

We are going to get out, scream and shout, and chant, and RALLY for equal marriage, not just in California, but in Ohio, and in Kentucky, and in Indiana, and in Florida, and in Arizona, and in Arkansas, and in New York, and in South Carolina... and everywhere.

Bring signs, bring noisemakers, bring friends!!!! Margaret Cho will be joining local organizers and community members in protesting the passage of Proposition 8 in California, which, once again, banned equal marriage in that state. We are furious this passed because, for a few moments, the state of California had equality and then it was taken away.

We see that as unacceptable, and we are going to join over 100 other localities and nearly 10 other countries in demonstrating that THIS STOPS NOW.

Let's get out and turn the tide, folks!

Where have you heard about this?

WVXU (article only, no audio, still working on it!)
CityBeat Blog!

Make sure you check out jointheimpact.com for more information if you aren't in Cincinnati!!!!!

Check out this site for the Mission Statement to jointheimpact.com!!!

Has the event made it to your blog??? Send us the link!!!! Also, following is the updated press release that came out today!!! Spread it around, kids!!!!

Cincinnati, OH -- Margaret Cho, award-winning actress and comedienne, will join Impact Cincinnati on November 15 protesting for equal marriage and against the passage of California's Proposition 8, which recently re-banned equal marriage in that state. The protest will occur at Cincinnati City Hall (801 Plum Street) at 1:30 p.m. on Saturday afternoon. Cho is scheduled to perform at the Taft Theater that evening and added the protest to her schedule. She has long been a proponent of rights for LGBTQ (lesbian, gay, bisexual, trans-identified, and queer) Americans and made several public statements against Proposition 8 during the campaign.

Impact Cincinnati is a coalition of local students, community members, and activists that responded to the call by the national initiative, JoinTheImpact.com, for a unified day of protests across the country for equal marriage. The national web site was created just days after the passage of Proposition 8, and, within hours, the site attracted tens of thousands of visitors an hour. Since its inception, the national site has been viewed by over a million visitors. Nearly 100 localities are holding events at the exact same time around the United States; activists in six countries, including the United Kingdom, Australia, and Japan, will also be holding demonstrations at American embassies in support of equal marriage. Other nearby protests include Columbus, Cleveland, Dayton, Indianapolis, Lexington, Louisville, Bowling Green (OH), Youngstown, and Athens.

Local organizers are clear that the intention of the protest is not to overturn Proposition 8. The goal, instead, is to create awareness and build a movement for equal marriage in all 50 states. "Saturday's protest will effectively unite the community in a grassroots effort to ignite the passion and commitment of a new generation of LGBTQ activism and justice," Tolle says. "Impact Cincinnati has been formed to create positive change towards equal marriage."

Saturday's event has received wide reception from individuals and the media to date, with the story appearing on the prominent Cincinnati Blog (http://www.cincinnati.blogspot.com) and CityBeat's web site. Tolle has been interviewed by three major radio stations in the area: WNKU, WMUB, and WVXU. Current projections suggest an estimated 1,000 participants at City Hall on Saturday afternoon; the addition of Cho to the event has spawned even greater interest

Impact Cincinnati is hopeful that the protest will spur discussion and movement towards positive change in the Ohio-Kentucky-Indiana region. Ohio, Kentucky, and Indiana all currently have laws banning equal marriage rights; Ohio and Kentucky have constitutional amendments, passed by voters in 2004, to the same effect.