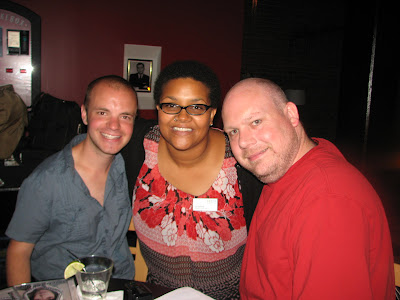 Equality Ohio hosted a little fundraiser at Below Zero this evening, and I had the distinct pleasure of hanging with my dears Erin Upchurch (of Equality Ohio), Cameron Tolle (of Impact Cincinnati), and Rusty Lockett (of Church of our Savior and the Gay and Lesbian Community Center), all pictured above. I did the single most shocking thing you would ever expect from me ... that is, gasp, signed up to be an Equality Ohio member. (Yes, Lynne, it's true.) Thanks to Erin we have a mini update on the Equal Housing and Employment Act (EHEA -- HB176), which would prohibit discrimination based on sexual orientation and gender identity/expression in Ohio.
The Ohio legislature is on recess right now, but we have received assurances that there will be a vote before this session ends. As it stands, we've not had a lot of leadership emerge in the Ohio Senate on the issue, so there is a lot of lobbying to do over there, too. Law in Ohio, though, seems to read that the House can pass a bill this session and then go to the Senate next session, so we don't have to start the process over again. Equality Ohio is asking people to continue to contact their State Representatives throughout the summer to keep the pressure on them until a vote comes up in late September or early October. For information on how to contact your local representative, go here.