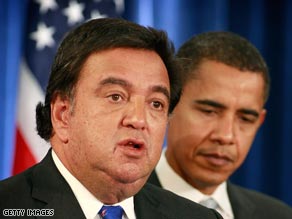 First of all, to the withdrawal of consideration of Bill Richardson from consideration for the role of Commerce Secretary, I say good for you. Though I love Gov. Richardson and think he would be amazing at the job, I think he is doing what is best for the country and showing the kind of intelligence and understanding that Gov. Blagojevich should have.
That is, bowing out when his personal issues seem to threaten his effectiveness as a public servant. From his statement via CNN:

"I do so with great sorrow. But a pending investigation of a company that has done business with New Mexico state government promises to extend for several weeks or, perhaps, even months," the statement reads. "Let me say unequivocally that I and my Administration have acted properly in all matters and that this investigation will bear out that fact. But I have concluded that the ongoing investigation also would have forced an untenable delay in the confirmation process."

I think this just says that he is looking to future plans to run for something greater (Richardson for President in 2016?). Thank you, Gov. Richardson, for putting the country above your ambition.

Also, congratulations to Al Franken for, seemingly, winning the Senate seat from Minnesota! From the Nation:

The certification should come Monday, after a final review of the tally, and Franken will likely be named the winner by 225 votes.

"We are confident that since there are no ballots left to count, the final margin will stand with Al Franken having won the election by 225 votes," says Marc Elias, Franken's recount attorney.