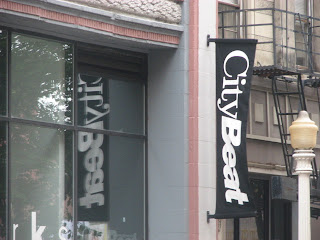 More of the same.

Actually, it was kind of fun. I had not seen Ryan or Marrakah in a while; Chris is always pleasant to see (duh, he's hot) and he's probably the most informed person I have ever met; and Doug is one of my favorite people in the world to talk about gay stuff with. However, the names that arrived are no surprise, even though it was a really balanced group. All five of us have been involved in some way, shape, or form for a while (I think I am the person with the shortest experience in the Cincy gay "community" -- a mere four and a half years!)

I would say that I think more was said than the usual bitch sessions of gay groups, though we were being descriptive and not prescriptive in our conversation. Mild groupthink occurred, but Kevin (the writer) managed the discussion well. I, at one point, complained that I wish people would just show up to stuff outside of a bar; the conversation turned to my apparent lack of desire to be involved, which I don't think is true :-). But that's the way groups work, especially when all of us are so invested, we can be a little defensive, I think. Doug even brought up a hot topic that could -- gasp -- potentially get him in trouble. I love him for it! Maybe he's learning from me; I'm beginning to believe that I need to start learning from him. He's going to be our mastermind, one day. I just want to be Teresa Heinz Kerry -- outspoken -- especially if I get to play the pretty wife of a politician.

It will make a good article -- and it will be on the cover in like a week!!!! And I had to slip the blog site to Kevin. I'm secretly looking for a job there. HA!