Jared Polis (D-CO) has indicated an interest in introducing an LGBT Omnibus Bill, which is being batted around as a possibility all over the interweb and in all sorts of political circles.

From the Washington Blade:

Polis said he's "very interested" in the concept of introducing a bill with "several aspects of the equality agenda." He noted that he believes other lawmakers would be interested in introducing the bill.

The nonprofit donors group eQualityGiving.org last month proposed that Congress tackle omnibus legislation that would include language regarding hate crimes, employment non-discrimination and "Don't Ask, Don't Tell," as well as language from other LGBT rights-related bills.

Likely not included would be any federal recognition of marriage rights, outside of those provided by the states. But it would, in effect, nullify DOMA, which is equally as awesome.

The idea of the Equality Omnibus Bill seems to be pushed by eQualityGiving.org, which gives services for people interested in donating to LGBT causes. The site not only details specific issues, and includes extensive resources and information, but also endorses candidates (and gives more information) and information about other organizations for you to support if X Y or Z are your causes.

What's great about the site is that not only do they list out "equality goals," but they also reference a study done by the HRC and Hunter College at the City University of New York that delineates relative interest in LGBT issues based on age and information level. They give us two graphs: 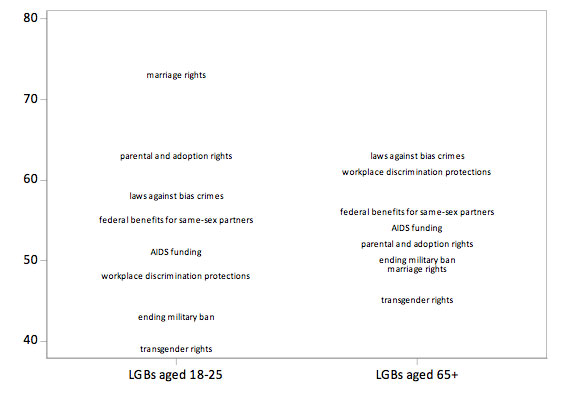 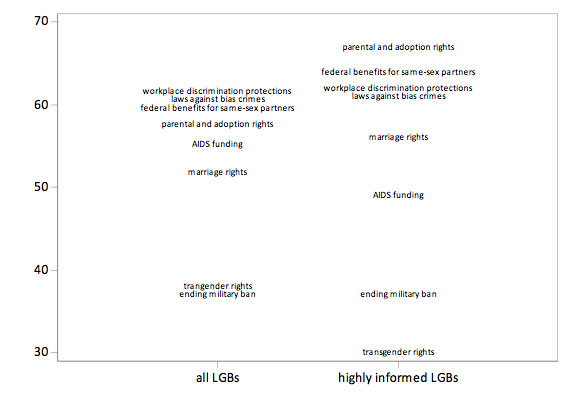 I'm sure this may of interest to some of the readers of my blog.
Posted by Barry Floore at 4/22/2009 02:41:00 AM
Labels: DADT, DOMA, Equality Omnibus Bill, eQualityGiving, HRC, Jared Polis

The graphs at the end make me think the HRC is still trying to justify it's record (or lack thereof) on transgender issues by claiming no one wants them to care. "Transgender rights" and "workplace discrimination" or "bias crimes" are mutually exclusive categories, but the HRC continues to treat them as such.