ADVENTURES OF: The Jewish Troll

I got this really neat feature installed on my computer where I can just take the card out of my phone, stick it in the computer and HEY! There are pictures.

In the great tradition of "having too much time" and "having unlimited access to digital resources..." QitC is going to start something new. 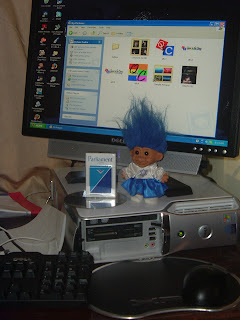 Is my Jewish troll. I found her one day, attached to a tag that had the flag of Israel, in the snow one day several years ago in Oxford while drunkenly stumbling home one night. She's been with me ever since.

1) That she made it home with me that night.

2) That she's stuck with me since then through... five? addresses. But the flag of Israel is lost. Now she just has a Star of David to remind us of her heritage.

But she's been on many adventures with me, and I thought I might start documenting some places she goes with me. (For those that have been in my car, she's been in the back, in the mess, for MONTHS.)

Anyways, so this is her, at my computer (the new one... isn't fabulous???) with my cigarettes. Doing much the same thing I am doing... wishing I could smoke in my house.

But she also matches my cigarettes! It's meant to be! 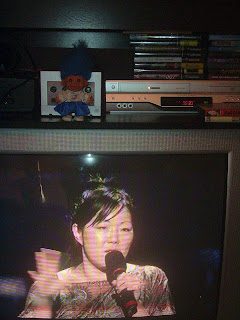 And this is me and her watching Margaret Cho: Assassins.

(And, I just realized that I have officially lost my mind. I am not only the cat lady... I am now Mimi from the Drew Carey Show... with my troll. Wonderful.)

Anyways, let's see if this lasts, or if I wake up this afternoon and realize, "God, that was the dumbest thing I've ever done" and then delete this post. LOL.

"You do not get to pick and choose from our culture and then leave behind the burden of inequality."