POP CULTURE: Make Me a Supermodel

In the great tradition of television, one station has stolen another station's idea and changed it, but only slightly.
In this case, we have BravoTV's (a division of NBC) Make Me a Supermodel, which is awfully similar to America's Next Top Model (owned by VH1, which is owned by Viacom, which also owns MTV -- did you know that?), which was mimicked by its own network by America's Most Smartest Model and whose Season 1 winner, Adrianne, brings us My Fair Brady (which she only got after a brief stint on The Surreal Life with her now husband) and which spawned the spinoff the Ja

nice Dickinson Modeling Agency (a show I LOVE, but only because Janice is fabulous and obsessed with stripping her models down as much as possible -- appears on Oxygen), which is now spinning off Abbey & Janice (will appear on Oxygen).

Anyways... I like Make Me a Supermodel, but only much for the same reason I really like America's Most Smartest Model. There are really hot boys that are half naked repeatedly throughout the show. There is no other value to it but that. I'm sorry guys, but, much like the ladies of ANTM, it is very unlikely we will ever see you again. I give props to Eva for being very successful (ANTM Cycle ... 3? ... winner), and Adrianne for forcing her way into our lives, but I haven't seen hide nor hair of anyone else.

(On a brief side note: I wonder if these shows suffer, also, from the Project Runway curse -- where the show winners tend to dive bomb immediately after being on TV. Shandi from Cycle BLAH of ANTM said that's what happened to her.)
Regardless, Make Me a Supermodel even brought us straight boys posing in underwear and gay poses. LOVE IT! Too bad it's destroying American television :-).
But just look how pretty the boys are!
In case you're curious -- Perry Ullmann is on top, Ronnie Kroell is in the middle, and Ben DiChiara is the one to the left. Ben has been in the bottom 3 several times, Ronnie is just now in the bottom 3 -- is the only openly gay one and in love with Ben, and Perry is like the superman of the show. Plus, there's this: 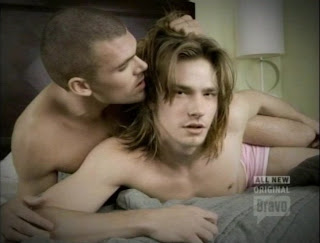