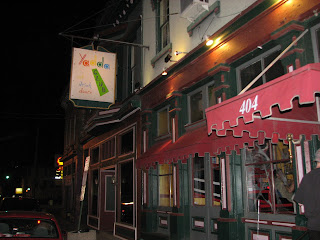 Click above for the Flickr photoset
At Yadda Club (GayCities Review, Yadda Myspace Site) last night, Explict -- the drag troupe that arose out of the ashes of Vivid (can anyon keeep track anymore?) -- debuted.
On the one hand, I'm hesitant because there are more drag troupes and more drag queens in this city than we can handle. On the other, friends of mine were in the show. Usually I wouldn't make a special trip out of it. But, to be fair, I used the opportunity to get drunk and make out with boys. :-) Some cute little white trash boy. Blah. He was balding. I hope he never calls. (Apparently, my nights out = how many guys I can make out with in a four hour span... I am such a tongue whore these days).
Back to Explicit and Yadda Club!
Explicit has 9 (ish) performers -- one queen, two femmes, and six kings. For having only four experienced performers, and five newbies, they did a pretty good job. They lack the refinement of, say, the Black Mondays or the Lixxgood Family, but that will come with time. Rather than go into the in's and out's of the numbers... there's a video out there that I filmed :-)... somewhere... but it will be fun to watch the troupe grow. They have potential :-). And they seem to have a lot of fun, and that's what matters more than anything else.
As for Yadda. I had not been there in well over a year. But it's a nice club, and there's lots of space. They redid their back porch so there's actual room (though no one was out there), and the whole bar now has this whole tiki-bar thing going on. Weird. But the drinks are moderate to strong and the bartender is cute as a button, and the prices aren't bad. And there are enough gay boys to keep me interested... and more lesbians than I would ever know what to do with. In short, it's fabulous.
Go, drink, have fun. And try not to do what I did... stumble drunkenly around the bar and flirt with everything that has a penis. Or, do it, just tell me about it later.
And the best part of the whole night? Realizing you can smoke inside. You know you're from Ohio when... you instinctively walk onto the back porch to have cigarette even though you can smoke at the bar and then are shocked to find yourself alone.
Cigarettes, booze, boys, alcohol. Life is good. Except in the morning. Then life is a hangover.

I don't even know what a drag troupe is.

And what's wrong with balding? :)