The Drop In Center Is Forced To Move 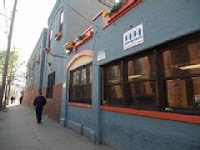 So, I was just informed by a friend of mine about how the City of Cincinnati is asking...no telling The Drop In Center (Central Pkwy) to move or they lose their funding and will close. Maybe you already have heard about this...

Why do they want them to move? Because they fear for the safety of the students attending the new School of Creative and Performing Arts, which is nearing the end of the construction phase.
The Drop Inn Center has refused to move. Cincinnati Officials are telling them that if they don't move, their funding will be cut off.
I'm sorry, wasn't there girl that was murdered last year outside the current location of the SCPA? It doesn't matter where you live...there is crime everywhere.
This just isn't right.
Juliet
PS...I think I feel a protest coming on. What do you think?
Posted by Juliet at 6/24/2009 04:36:00 PM
Labels: City of Cincinnati, SCPA, The Drop In Center

Drop Inn Center should move. There are too many homeless shelters downtown already. The suburbs should share some of the burden. Its a bunch of crap that Over the Rhine has been forced for years to be the city's only dumping ground for homeless, ex-cons, drug/alcohol addicts and the like. That's what's not right. We should protest to decentralize the social service agencies in this city.
I would be thrilled to see the Drop Inn Center moved.

It's a fact that these individuals from the Drop have an uncanny ability to day-trip into other neighborhoods for criminal purposes or feed off the existing criminality that residents & business owners are trying desperately to run out.

I don't know of one shelter, program, or operation that caters to these destructive individuals that has a track record of success. Their only claim to fame is when it's city budget time, they belly up, & now they've resorted to actual threats to get their hands on taxpayer money for their freeloader programs.

Will these shelters & various operations show up in Court to speak to the Judge when one of their clients is arrested for stealing tip money from an independent store owner? Aw, HEEEELLLL NAW!

Move out the Drop, the wet house & all these money sucking operatives. Locate all them to the old Kahn's meat processing plant & put a fence with razor wire around the perimeter. If I have to pay their freight, I damned sure should have a say in how they're housed & where they're housed. Such as it is, they've got my money & their clients are criming in my neighborhood.

Yeah, I'm with Anonymous 1, actually. Though I do not mind social services centers being in OTR, they're almost ALL in OTR. I would not protest the Drop Inn center moving.

I find the City totally at fault. They knew the Drop In Center was there to start with and they chose to build anyway....in Over the Rhine, which was/is/forever will be the shithole of Cincinnati.

The Drop In Center should call their bluff. They should say fuck it and leave and let the homeless wander desperately around --- which, sadly, is punishing the wrong person here.

Must our City Council members forever have their heads firmly implanted up their collective asses, year after year, decade after decade?

They are such an embarassment.

Push it into Clifton where all the other crime and unwanteds are being pushed. Ruin another neighborhood, Cincinnati.

does anyone know if the city has suggested or offered up a place for the drop inn center to move?

"in Over the Rhine, which was/is/forever will be the shithole of Cincinnati."
To whoever wrote the above line: You are exactly whats wrong with this city This kind of negative, pessimistic thinking is what has allowed these problems to fester for so long. Over the Rhine is our city's most important neighborhood and is an architectural and historical gem. The fact that cincinnatians just write it off as a wasteland and allow people to dump on it constantly is a shame. Anyone who thinks like that should realize they are at fault here and should be truly ashamed.

I have to say that I'm a bit disappointed. I really thought that I would find compassion from our readers on the issue of homelessness.

First of all, homelessness DOES NOT equal crime. Are there some that commit crimes? Yes. But so do rich people in high society. And second, who are you to judge? Is it okay that people think all gay bars should be in bad areas and under bridges because to them we are freaks and molesters? NO.

If you're for moving The Drop In Center, then give a solid ligitimate suggestion as to what to do and where they should go. Without judgement and without assumptions.

Besides, is it the City of Cincinnati's fault that we have so many homeless? What about all the condos that are going up and pushing people out? Where do you suggest they go?

And as far as taking it to the suburbs...thats funny. Thats like saying they'd let us put a gay bar in Blue Ash or Indian Hill.

Give me a break.

There was a school on the other side of Washington Park for years and no kids were harmed. They let programming go to hell at SCPA. All city leaders cared about was a new building to help gentrify the area.

The city hates poor people and has delusions of being made up of only YPs.

Keep all of your scumbag lazy homeless good for nothing garbage anywhere in Cincinnati. Don't ruin another area with your scum. I moved out of the city but I'll be at Washington Park on Saturday to watch another free show. Cincinnati is one big Rumpke site and it's gonna get worse.