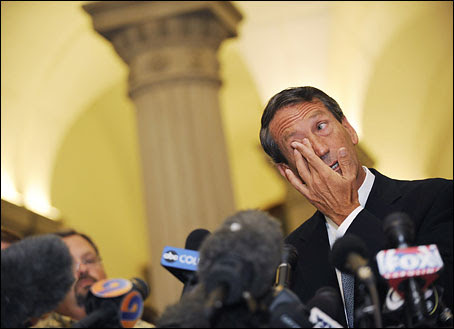 I didn't know the Governor of South Carolina was missing until yesterday morning when we were at the Subway, drinking at 9am, and we were joking that he probably was just off carousing with a lover somewhere. Excepting that we were joking that it would be a male lover... we were dead on.
For those who haven't followed, Governor Mark Sanford of South Carolina went missing, saying that he had to hike part of the Appalachian Trail. Wrong -- the married Governor was, actually, in Argentina with his paramour. On tax payer dollars. My dad's thoughts on the subject: how did he think he was going to get away with it? Well, how does anyone, really?
I voted for Gov. Sanford in 2004 because I liked him. There's been a lot of talk about how the arch-conservative southern governor has been shamed and how great is it for our side that he's gonna be out the door. Seriously, though, I voted for him. Not because he was a great guy, and certainly not because he was on my side. It's an idiosynchricity of southerners that we vote for the guy who's best for the state... the guy we trust... and I did. Sanford was quiet and unassuming, had a level head, seemed pretty smart, and had the right experience to make him a decent governor. He had the light southern drawl and the firm handshake and just a little bit of gumption to challenge the state legislature, at the time gutting the state budget for pork and pet projects.
To protest, once, he walked into the statehouse with two squealing pigs under his arms. It was very Huckabee-esque, the move, except there was no Huckabee then, and it was just something near awesome that Sanford had done.
So I voted for Sanford because he was good for South Carolina. In a lot of ways, I'm disappointed with him, severely and awfully disappointed with him because I believed he was genuine. I believed that he truly believed in this mantra of family values and morality that he campaigned on. Sure, they weren't in agreement with my values, necessarily, but there's something to knowing that the guy leading you actually believes in what he's saying rather than just saying it to get elected. And, in coming out with this awfulness, I am disappointed because I believed in Gov. Sanford. More importantly, I'm disappointed in a way with our (read: us liberal bloggers) quick judgment and death knell pounding of the "big evil southern governor." He wasn't evil, he wasn't a bad man, he was a good governor (though I'm sure someone will prove me wrong), and I think he was probably a decent man.
But we overlook the goodness in him in our rush to tell everyone he's lost every political aspiration he's ever had. And we overlook the fact that he does represent his state, and a lot of people in that state probably feel the same way as I do... disappointed.
The State newspaper today ran emails that allegedly are between Gov. Sanford and the woman, Maria, and I almost feel sorry for the man. The affair confused him, and it scared him. He knew what he was doing. I wonder what his wife thinks of the whole thing, reading those emails.
Sanford, quiet and unassuming governor of South Carolina, is now sad and alone.
Picture from The Washington Post.
Posted by Barry Floore at 6/25/2009 06:46:00 AM
Labels: Mark Sanford, South Carolina

Your willingness to eschew the often oppressive liberal-gay orthdoxy is refreshing. While I might not agree with your vote, I for one do not feel like you committed heresy in voting for a Southern Republican -- admitting to it -- and defending it. It was thoughtful. Here's to independent reasoning.

south carolina has lost so much money recently, they are even having to outsource their poon-tang.