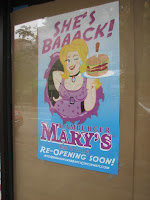 I had the ultimate pleasure this week, having the opportunity to meet with the new manager of the re-opening Hamburger Mary's.
I started going to the old Hamburger Mary's around 2003-ish, when I started making actual gay friends at Miami. Going downtown? Where else would we go for dinner? We were forty minutes north and the only place we knew to eat that wasn't a chain was Hamburger Mary's. We would do our Spectrum meeting, then we would either head directly to Pipeline or go first to Hamburger Mary's and then to Pipeline. Or, if we had anything else to do downtown, it was always Hamburger Mary's. I have a lot of good memories there, so when it became Universal Grille and then shut down all together... I was more than disappointed.
I contacted the franchise last week just to ask a few questions and weaseled my way in to see the place ... empty and being redecorated. I have to credit darling Penny Tration and partner, Will Reed, for being there... they added a lot of history and information about the bar that I had never known.
So, what's gonna be new over at Mary's? Well, very little, actually.
The new manager reports that the Hamburger Mary's we know and love is coming back, and we'll see much the same that we remember with a few updates. Outside of structural and a few design issues, management is dedicated to bringing back all of the wonderful things that made Hamburger Mary's fabulous, including some of their famous specialty burgers like the Big Kahuna and the Big Blue. You won't see massive changes to the layout, though they have been carefully listening to feedback from the community about what needed updating. Nothing is set in stone except flow changes -- doors moving, roofs reinforcing, etc. -- but plans are in the works for updates to the bar, the entry way, the VIP areas, the DJ booth, and the stage.
All, of course, for the sole purpose of improving service and the Mary's experience.
Gail, the new manager, is also fiercely dedicated to being involved with the local community, both as a neighbor to other downtown businesses and as one of the pantheon of great LGBTQ businesses in the city. She also highlights their desire to be a greener business, talking enthusiastically about using environmentally friendly cleaning products.
As for the kitsch that littered the walls of the old owners? Gone... mostly, though Gail pointed out two classic pictures of Marilyn Monroe and Audrey Hepburn that would adorn the stucco, mentioning as well one of Shirley Temple that would show up. It'll be there, but it sounds more like part of a bigger design scheme.
When will it open? That's the question, isn't it? They aren't sure, either, though they have an aggressive and hopeful schedule of reconstruction. They are taking their time, doing it right, and it will open, no worries there. And I'm sure it will be fabulous.
We'll keep you updated. No worries, folks. :-)
Posted by Barry Floore at 6/04/2009 08:41:00 PM
Labels: CINCY GAY SCENE, Hamburger Mary's

Hope the watch the abuse of GHB that was present when known as Universal Grille. That's all I have to say about that....

I'm so thrilled Mary's will be re-opening. I never had the chance to go to the restaurant before it closed after it switched names. This is so awesome! I hear about Hamburger Mary's from several podcasters from LA and Chicago. Finally, I get to enjoy it like all those other lucky kids!

First of all, Jazmine you’re disgusting!

Second of all, I was a frequent patron at Hamburger Mary’s from the beginning of Mary’s to the end of Universal Grille. I also was/am close friends with the owners and several people who worked there and I NEVER, EVER witnessed the alleged GHB problem that the above person implies!! In fact a couple long time popular employees were fired because of alleged of substance abuse on their personal time.
I would have to ask, if there was such a problem, why did you keep going back?!

The previous owners worked very hard make the restaurant and bar a safe environment for everyone and to succeed in this city. Not to mention were involved in promoting, funding and supporting many LGBT events in Cincinnati.

I find it very funny that very often we do not appreciate something until it’s gone.

I wish the new owners the best in this new venture, especially given the somewhat pretentious clientele they will have to deal with.

"We were forty minutes north and the only place we knew to eat that wasn't a chain was Hamburger Mary's. We would do our Spectrum meeting, then we would either head directly to Pipeline or go first to Hamburger Mary's and then to Pipeline."


those were fun times barry. miss you!