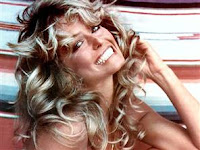 It was just announced that Farrah Fawcett has lost her battle with cancer, she was 62.
She had been diagnosed with anal cancer in 2006. As she underwent treatment, she enlisted the help of actor Ryan O’Neal, who had been her longtime companion and was the father of her son, Redmond, born in 1985.
Her struggle with painful treatments and dispiriting setbacks was recorded in the television documentary “Farrah’s Story.” Fawcett sought cures in Germany as well as the United States, battling the disease with iron determination even as her body weakened.
“Her big message to people is don’t give up, no matter what they say to you, keep fighting,” her friend Alana Stewart said. NBC estimated the May 15, 2009, broadcast drew nearly 9 million viewers.
In the documentary, Fawcett was seen shaving off most of her trademark locks before chemotherapy could claim them. Toward the end, she’s seen huddled in bed, barely responding to a visit from her son.
May she now find peace.
Juliet
Posted by Juliet at 6/25/2009 01:28:00 PM
Labels: Farrah Fawcett, Juliet, POP CULTURE