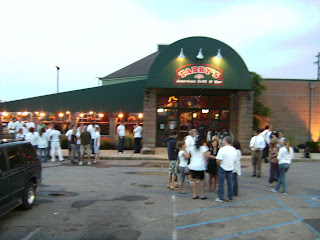 Hello fabulous readers! First I just want to say that I'm sorry for my late posting on our gathering at Tabby's this past Tuesday. Since then my computer has crashed and my sisters cat had to be put to sleep last night. But with that out of the way, I'm back!
Tuesday night at Tabby's was certainly an evening to remember. As we all met at the Walgreens parking lot in Clifton, I was concerned that not many people would show. I became hopeful when the fellow I was car pooling was a straight ally! As we approached Tabby's, honestly I was a bit nervous. Will they be open to us? Will there be counter-protesters? Will anyone show up?
As we walked around to the front of Tabby's, there were already about thirty-forty people outside. Channel 9, Channel 12, Channel 5, Cincinnati Enquirer, City Beat and maybe even other media outlets I'm not aware of. It was a beautiful sight! Ronnie's mom and sister were also there to join us!
As we began to walk in I started to hear this noise....the customers and staff were all clapping!! I didn't know what to do! It was a total surprise. We walked around talked amongst each other and applauded Ronnie's mom and sister as they came to greet us. (I apologize for my bad video skills...I'm still beating myself up over my camera not working properly.)

I spoke with a regular customer and asked him what he thought of what was happening. He told me that he thought it was nice that we were doing this in support of Ronnie and that he doesn't mind us being there. I thought, "great!". He then went on to explain that his brother was a "flamer" and that it embarresses him. I said to him, "Isn't it better that he be himself?" He answered, "No.". So, I moved on. I then talked to J.T. Riley who is the General Manager of the super great Irish Pub and Restaurant, The Claddagh Irish Pub off Mason-Montgomery Road. J.T. was appauled by what had happened and said "he could never imagine that happening at his restauraunt." He went onto mention that The Claddagh is a gay-friendly restaurant...so get on over there!! (There is also one in Newport - ran by a lesbian I hear). Check them out!

So, all in all I think it was a very succesful event. We saw the progress they were making when we came in with applause and also the signs that were posted everywhere that read: 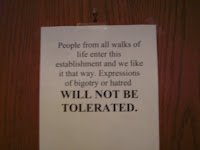 I hope that this will show others that we will not tolerate hate, bigotry or discrimination...and most certainly not abuse. We were all Ronnie that night. It could have been any one of us. Remember that. YOU ARE NOT EXEMPT FROM THIS HAPPENING TO YOU. So help us to continue the fight against hate! If you want to learn more about how to get involved, keep reading this blog of course, and also see http://www.impactcincinnati.com/ and www.facebook.com/impactcincinnati.

Thanks everyone for coming out! (heehee)

Here are some more pictures!! 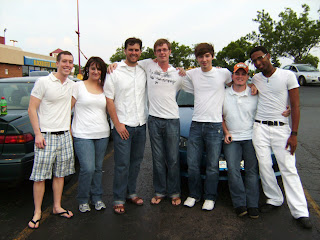 Getting ready to leave from Clifton! 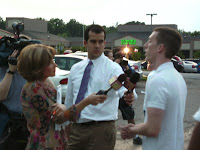 Chris being interviewed! Way to represent Chris! (Cody did too!) 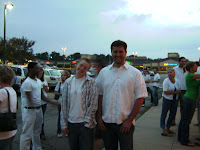 Dannie and Sam...love these guys! Sorry I lost you in the crowd Sam, my bad :-) 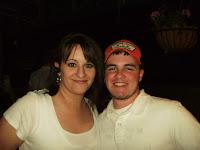 Juliet and Cody (Aren't we cute?) 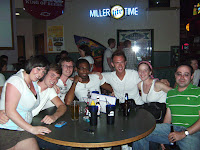 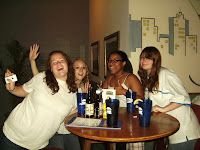 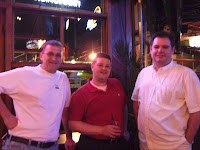