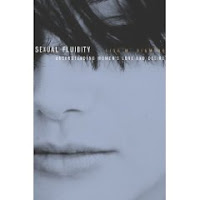 Isn't love blind when it comes to gender? Do you think that someone is either gay or not gay and nothing inbetween? If you do, you need to read this book that is spinning some heads in the gay community. Forget the LGBT labels that you know. We are much more fluid than you may think.

Heard of the Kinsley Scale? This scale created by Alfred Kinsey attempts to describe a person's sexual orientation based on history or episodes of their sexual activity at a given time. It uses a scale from 0, meaning exclusively heterosexual, to 6, meaning exclusively homosexual. However, this study was created with predominatley...well men. So, what does that mean for women? It's always about the boys with these studies isn't it, ladies? Well, not anymore.
Lisa M. Diamond, Professor of Psychology and Gender Studies at the University of Utah has written a book, which is now getting more attention, thanks to Oprah Winfrey, called Sexual Fluidity.
The Harvard University Press has this to say:
"Diamond is the first to study a large group of women over time. She has tracked one-hundred women for more than ten years as they have emerged from adolescence into adulthood. She summarizes their experiences and reviews research ranging from the psychology of love to the biology of sex differences. Sexual Fluidity offers moving first-person accounts of women falling in and out of love with men or women at different times in their lives. For some, gender becomes irrelevant: "I fall in love with the person, not the gender," say some respondents."
I know that some of you out there think that a person is either gay or straight and no inbetween. Well, that is stone age thinking folks. I have a lot of friends who are bisexual and even more who were in straight relationships having straight sex and now identify as gay. Can you relate to that.? We shouldn't have labels when it comes to sexual orientation or sexual identity. There is a saying out there that I think is ridiculous, but I've heard alot of lesbians say about women that identify as bisexual. "I don't hate ya, but I won't date ya!". And even I have been guilty of saying "Bi now, gay later."
We need to stop all that craziness and accept those who are brave enough to be themselves. Accept bisexuals. They are just as much apart of this community as we are. Remember, LGBT.
It's all in how you idenitify yourself. Not how others identify or label you. Here is a look into what sexual fluidity is. How do you identify?
1. A married man occasionally wants to have sex with men. He may or may not act out those wishes. By inclination, that would make him bisexual. Nevertheless, he may still identify as a straight man.
2. A woman in a lesbian relationship wants to have sex with men. She may act out those wishes, or she may not, maybe based on the prejudices against bisexual people in her community. By inclination, she is bisexual. Nevertheless, she may still identify as a lesbian woman.
3. An otherwise conservative exclusively homosexual man has objections against what he considers "gay identity politics". He considers himself homosexual, but does not identify as gay.
4. Two asexual people marry. They never have sex, nor want it, but still want the relationship. They may identify as asexual, or they may identify as straight.
5. An "ex-gay" woman is in an exclusive relationship with a man. Although she still has fantasies and thoughts about being with a woman, she now identifies as heterosexual.
6. A transman considers his relationship to a cis-man as technically heterosexual, but still both identify as gay.
7. A post-operative transwoman and a straight male partner may consider their relationship as being heterosexual despite both being considered as homosexual by others, including those in the homosexual community.
8. People may identify as pansexual, queer or similar, despite having a sexual orientation that could also be described at least in part by more conventional terms such as straight, gay or lesbian, or hetero- or homo- or bisexual.
Spinning heads yet? My suggestion...read the book.
Juliet
Posted by Juliet at 6/08/2009 01:16:00 PM
Labels: Bisexuality, Harvard Univ. Press, sexual fluidity, Sexual identity, Wikipedia

Nice one hun! I put myself in the category of "Homosexual, but will never rule out instances of pansexual attraction" lol
how's that for a classification?! haha

Technically everyone is pansexual (which is to say, synonymous with the word "human")

I'm hearin' all this, Juliet.

It's just that labels really almost are a requirement to make sense of phenomena in our world.

For example, I identify as "gay."

It's the briefest way I know of saying:

"Hi, I'm Jason, I'm a male who is very attracted to males; I cannot explain this attraction because it's something chemical in me, a feeling there's no opting out of; I find women attractive, yes, and am not exactly averse to the idea of sexual intercourse with a female, it's just that I feel no feelings of romance toward women like I do men, so I do not waste my time leading on a woman and hurting her feelings when she discovers I cannot connect with her on that level; There may come a day when something inside me changes and I meet a female I can connect with on that level--I'll admit that--but I'm not holding my breath; But at the end of the day, I say I am "gay" because if I explain and reveal myself as I just have, then people opposed to same-sex relationships will be more encouraged to claim that I have the potential to reject the so-called homosexual lifestyle and discover success in an opposite-sex relationship since I admit to recognizing attractive qualities in a female...and I don't want to energize the campaigns of hatred and intolerance of those people opposed to the reality that I find satisfaction in a same-sex relationship."

my two (euro)cents, via the one and only:

"As much as it is necessary to assert political demands through recourse to identity categories, and to lay claim to the power to name oneself and determine the conditions under which that name is used, it is also impossible to sustain that kind of mastery over the trajectory of those categories within discourse. This is not an argument against using identity categories, but it is a reminder of the risk that attends every such use. The expectation of self-determination that self-naming arouses is paradoxically contested by the historicity of the name itself."

Great response to this one! Thanks everyone! As you can see, everyone identifies differently. Some may be surprising to you and some may not be. The point is that we can not limit ourselves to be either gay or not gay. We all have different desires and wants and for some, those desires may overlap. Its all about being comfortable with yourself and ACCEPTING YOURSELF...do not worry whether someone accepts you...if they love and value you as a human being, they won't care where you float on the lines of fluidity.