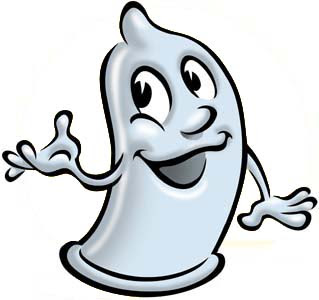 YEA! QUESTION FOR FRIDAY IS BACK! Well, sort of, I'm almost 24 hours late, but I promise he was totally worth the delay.

If you got a curable STD from a trick/sex partner, and you knew that both you and they had been to the doc and had it "dealt with," is it ok to sleep with them again?

I'll say this: I thought I was going to LOL a lot more than I did. Two central themes: 1) NO, and 2) did he cheat on me? That's no fun. This is a serious concern, folks. Well, not for me, for a "friend."
I mean, those were some serious answers. My answer in 140 characters or less: Yes. I'm not one to judge, we all fuck up.
I got no worries if you had an STD that you gave to me -- especially if it's curable and we dealt with that. Hell, even if it's incurable, that's ok too right?
Right?
Ha. The person who proposed this question gave me this real conversation that sparked this question:

Only if his dick was as fun and animated as that condom cartoon you have for this post.

You're not joking about that phone convo, are you?