Out With It Already!!! 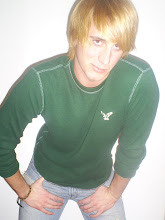 And another Cincinnati area queer blogger makes his appearance on the scene -- see, I told you we are a large and growing crowd!

Meet Jason. He's guest blogged for us over at GayCincinnati.com, and he's got a brand-spanking new site of his own -- Out With It Already!!! His first post deals with Miss Prejean and the awfulness that is Liberty University (shudder -- anything founded by Jerry Falwell is, well... I'm not quite sure what I could say that couldn't be considered "inciting violence").

Let Perez call her [Carrie Prejean] a bitch. Like it or not, Perez is a spokesperson for the LGBT community, and all who visit his blog know he says this out of anger and frustration with a society and government that treats LGBT as second-class citizens or worse. Straight people who check in with Perez now are learning to understand that anger and frustration.

Think of it this way. I remember being a kid and having friends whose parents told them “no” to everything all the time. After a while, I thought my friends’ parents were bitches, too!

Maybe it’s better that Miss California said “no.” You can only hold down a group for so long before people come around to seeing that suffering and say, “It’s time to tell those bitches to take a hike!”

Jason and Out With It Already have now been added to the QueerOhio blogroll to your left; welcome to the scene, baby doll!!!!
Posted by Barry Floore at 5/26/2009 02:41:00 AM
Labels: BLOGGING, CINCY GAY SCENE, Jerry Falwell, Liberty University, Miss USA, Out With It Already