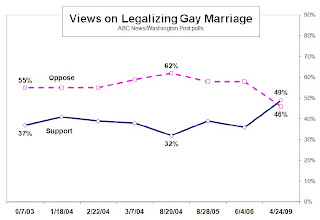 Yesterday, I asked about a CBS poll that said 42% of the country supports equal marriage, and we chalked it up to the Vermont/Iowa effect.

Today, an ABC poll comes saying 49% support equal marriage. Interesting. I think we can safely say that we are on the way to actual support for equal marriage, and we are likely well into the "support for some recognition" territory.

Yet, I have a problem with the question that was asked in the ABC poll:

On another subject, do you think it should be legal or illegal for gay and lesbian/homosexual couples to get married? Do you feel that way strongly or somewhat?

In short: they were given two options, no in between. I wonder how the numbers would break down if civil unions/domestic partnerships were included? I'm still optimistic though, especially since 53% believed that marriages from another state should be recognized in their own.

Things are looking up :-).
Thanks be to Nate Silver at FiveThirtyEight.com for a great analysis. He indicates that the preference seems to be civil unions>marriage>no recognition, and, in the absence of the third option, marriage will become overrepresented... thus skewing the ABC poll. Silver seems to chalk these up as indicative of movement, but likely outliers, especially considering a Quinnipiac poll also released today showing marriage support around 38% and opposition at 55%, though support for civil unions is safely at 57%.
Posted by Barry Floore at 4/30/2009 05:38:00 PM
Labels: ABC, CBS, FiveThirtyEight.com, gay marriage