Physiology of the Phallus 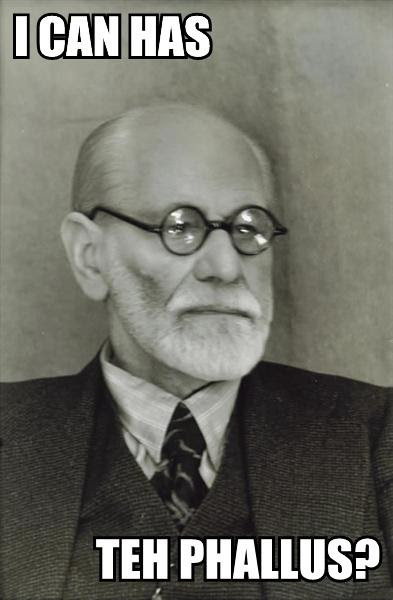 Thanks to @kate_the_great for the Tweet on this one...
Why is the phallus (ie, the "penis") shaped like it is? I know, I've never asked the question, either. I've just assumed it was there for my own pleasure. The question seems to have bothered Gordon Gallup of SUNY-Albany so much that he decided to research the reason for the shape, and came up with some interesting results:

So how did natural selection equip men to solve the adaptive problem of other men impregnating their sexual partners? The answer, according to Gallup, is their penises were sculpted in such a way that the organ would effectively displace the semen of competitors from their partner’s vagina, a well-synchronized effect facilitated by the “upsuck” of thrusting during intercourse. Specifically, the coronal ridge offers a special removal service by expunging foreign sperm. According to this analysis, the effect of thrusting would be to draw other men’s sperm away from the cervix and back around the glans, thus “scooping out” the semen deposited by a sexual rival.

Seriously folks. They even researched it using toys -- both vaginal and penile -- in order to demonstrate just how much semen a larger glans (the head) could "scoop out" of another partner ... finding that, the larger the glans (and, btw, the deeper the penetration), a partner could displace as much as 91% of a woman's former partner's semen.

Ironically, he also comes to the conclusion that, if this is the case, it is also possible that a man (uncircumcised) would be able to impregnate a woman without ever having sex with her ... but, instead, by having his semen deposited into the foreskin of another male (via vaginal sex with a shared partner). Thus, the most likely fathers would be those men who could thrust deeper and who had a bigger head to create the proper suctioning/scooping in order to disrupt the seminal placement of another man, leaving the author to conclude:

So if you want advice that’ll give you a leg up in the evolutionary arms race, don’t go West, young man—go deep.

For gay men, this is interesting because a bottom could seroconvert even if the top is not HIV+ ... simply based on the seminal fluid left in the foreskin. Hrm.
Posted by Barry Floore at 4/27/2009 07:24:00 PM
Labels: GENERAL STUFF, penis, science

i don't think your interesting note for gay people holds much weight. Isn't HIV incredibly unstable outside of the body? So, unless there's some like tag-teaming going on (which kind of userps any semen hitch-hiker worries), it isn't a very viable infection vector.

Well, there's a lot of "if's" that go into that particular scenario...

IF the top is uncut... IF there is HIV+ semen in the bottom.... IF that semen was deposited there in the last 48 hours... IF the top then moves onto the next partner...

It's a thought game. A possibility. You're right, though, not viable on a normal day at all.