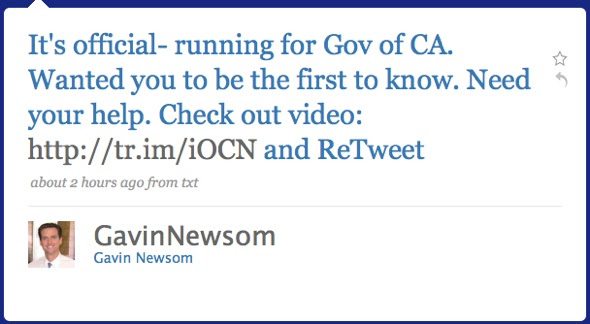 Image from the VentureBeat story
Gavin Newsom went to his online base today to announce his bid for the 2010 California gubernatorial (that's Governor, btw) race, using his Facebook site, Twitter, and YouTube in hopes of connecting first to the net-savvy Obama supporters.

Why does this matter, you ask? Because darling Newsom broke the law for gay folk -- that is, in 2004, he stepped and ordered the city clerks to start issuing same-sex marriage licenses. Rather than just say, "I support SSM," he said, "It's time, now." (These were the marriage licenses that led us to Prop 8, btw, but that's a whole other argument.) It was a beautiful few days when SF just started going with it.

And so, Gavin Newsom is going up to run for Governor of California -- early speculation, though, is that he will be up against a primary fight with popular senator Dianne Feinstein. I have a dilemma, then, I really like women in politics... but I really like Newsom. What's a queer gonna do?

I think we need to look at the record, Newsom Vs. Feinstein with reference to LGBT issues, and for me, the strongest one wins. I like Feinstein too, but what has she done for us lately. Seriously - what HAS she done? I'm curious...