Focus on ALL Families 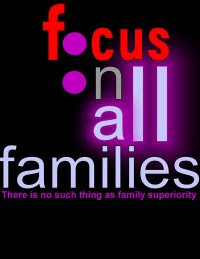 In the same vein as groups like Phelp-A-Thon, nearly a dozen local and statewide organizations (including IMPACTCincinnati, Equality Ohio, Planned Parenthood, GLSEN, UC's Out on Campus, etc. etc. etc.) have teamed up to raise money in the shadow of CCV's annual fundraising banquet... which is occurring next Tuesday, April 21st at the Cintas Center on Xavier University's campus!

The Xavier Alliance invites the greater Cincinnati and Xavier communities to the University's greenspace for an evening of inclusive, diverse family fun!

On April 21st, Citizens for Community Values (CCV)-- an extreme right-wing organization-- is hosting their annual fundraising banquet in the Cintas Center on Xavier University's Campus. CCV, whose mission is to "reduce destructive behaviors" contrary to their ideals, has channeled millions of dollars into anti-family and anti-equality legislation, including the Defense of Marriage Act in Ohio, Article XII in Cincinnati, Proposition 8 in California, and most recently, an attempt to overturn marital equality in Iowa. Citizens for Community Values is directly affiliated with Focus On The Family, the Evangelist Colorado Springs organization that preaches controversial so-called biblical truths and were big Proposition 8 donors.

In response to such blatant bigotry on our campus, the Alliance has teamed with numerous student and community organizations to produce "Focus on ALL Families"-- an evening of REAL family fun. Bring your friends, family, and children for a night of fun activities-- including face painting, animals from the zoo, cotton candy, balloon animals, and snacks-- all while embracing the assortment of characteristics and qualities that make all families so wonderfully diverse.

While CCV addresses diverse communities with divisive and hateful rhetoric, the Alliance refuses to sink to their level. Instead, the evening will remain positively focused on the ideals of inclusivity, progressiveness, and acceptance.

A ticket for CCV's banquet would cost you nearly $500-- that's $500 that would inevitably be used towards anti-equality and anti-family legislation throughout Ohio and the rest of the country. Instead, HELP SUPPORT PROGRESSIVE STUDENT ORGANIZATIONS ON XAVIER'S CAMPUS!! Equality Ohio is leading a national fundraiser, asking people and organizations to donate $5 to show their support for diversity and progressiveness on Xavier's Campus.

CIRCULATE THIS LINK-- HELP SPREAD THE WORD!! Even if you can't attend the event, please consider donating $5 for the sake of diversity and inclusion!

The Alliance is thankful for the support of various organizations throughout Cincinnati and Ohio in making this event a success, including: IMPACT Cincinnati, Equality Ohio, MUSE, The Cincinnati Men's Chorus, Planned Parenthood, The Gathering, PFLAG, GLSEN, UC's Out on Campus, Gender Bloc, and the Gender Queer Coalition.

Parking is available in the lots nearest the Cintas Center

*Link will take you to an Equality Ohio fundraising page -- and that's ok. Equality Ohio has generously donated their online fundraising capabilities to support this effort, just make sure you type in "Xavier University" in the "dedicated to" field.

I got a chance to chat with Cameron Tolle, lead organizer of the event (as well as leadership roles with IMPACTCincinnati, the Xavier Alliance, and JoinTheImpact), and he said that the event "hope[s] to empower members of the Xavier and Cincinnati communities who believe in more than just CCV's narrow definition of family. As CCV raises money for anti-equality causes next Tuesday, we hope to do our part to support diversity and inclusion."

Now, you all know this queen... I love me some good, saucy activist rhetoric, but there's something I love even more: a carnival. Give me balloon animals and face painting, and I think my life will be quite full -- thank you!

Seriously, though, not a bad idea. Why are the only people who get money on the 21st are people who hate us? If you're a local, consider going... in fact, just go. If you can't, or aren't a local, click the link above (or here) and donate to raise money for progressive and supportive organizations that oppose CCV's narrow ideal of this American life.

Where I wish the statement was a bit stronger and forcefull I wish Impact Cincinnati the best of luck.