Gay Outing Hubbub About to Begin 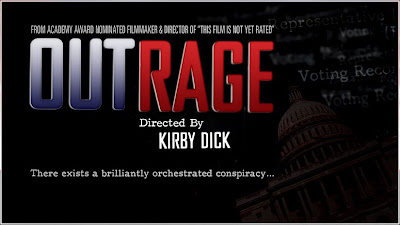 A movie is coming out this week, being screened at the Tribeca Film Festival on May 1, known as Outrage the Movie which, according to the film narrative "tells the story of the history and workings of Washington DC’s glass closet and the hypocrisy of powerful forces that benefit politically by promoting public policies that deny rights to gay and lesbian citizens."
In short: it's a documentary about being gay and political in Washington, DC. There has been a little hype, but BlogActive decided to shake things up today...
...reporting that the movie will out Florida Gov. Charlie Crist. Some rumors have flown that we'll be seeing quite a few prominent anti-gay folks outed with this documentary, but surely, if they do out Crist, then that will be the hallmark of the show.
I just have two questions:
Regardless, I'll be interested in seeing the movie.
If you look further at BlogActive... he even has a list of in the closet reps/etc. on the left side of the page.
Posted by Barry Floore at 4/21/2009 05:04:00 PM
Labels: BlogActive, Charlie Crist, OUTRAGE, outting, POLITICS

When I get home, I'll look up the really excellent and thoughtful position on outing put together by AfterElton. To date, it's the best answer I've seen on the ethics of outing.

Thank you darling. I knew someone else had read that article, but I could never find it again.