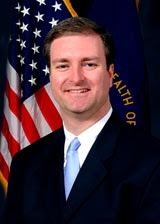 Thanks to TheHill.com, via Electoral-vote.com:

Kentucky Secretary of State Trey Grayson (R) has formed an exploratory committee to run for Senate with the consent of his would-be primary opponent, Sen. Jim Bunning (R-Ky.), sources tell The Hill.

Bunning, who has angrily pushed back against talk that he would retire in 2010 at the end of his second term, met with Grayson on Wednesday in Washington. The senator has not announced his 2010 intentions but he made clear to Grayson that he would not begrudge an exploratory committee, a move sources said will allow Bunning to appear as a kingmaker...

Grayson, an up-and-coming GOP star, will give Republicans a much better chance of retaining the seat than Bunning would have. A statewide elected official who survived what was otherwise a good year for Democrats in 2007, Grayson has been laying the groundwork for a Senate bid, though he made clear he would not run against Bunning.

"I have no plans to run against Sen. Bunning. This exploratory committee will allow me to travel the commonwealth, meet with potential supporters and lay the foundation for a campaign," Grayson said in a statement.

I have this thought Bunning is playing this out to run against McConnell in.. 2012? Or perhaps Governor... Remember, Bunning is a political smarty-pants, and he's mildly insane. Which makes him dangerous -- and exciting.
Grayson, meanwhile, looks like a Senator -- very old school, very... well, I thought he'd be better looking.
Posted by Barry Floore at 5/01/2009 07:17:00 AM
Labels: ELECTION 2010, Electoral Vote, Jim Bunning, Kentucky, Senate, Trey Grayson