I don't have time to do a separate post right now, yet, but I will. I just wanted everyone to please note that QueerCincinnati.com was nominated for Best Local Website. Please vote for me :-). Kthxbye!

While I'm cooking (I know -- gasp, it happens occasionally -- how long do you cook chicken for, btw?), I thought I might write up, at least, the LGBT nominees on CityBeat's "Best of the Cincinnati 2009" competition (this link is correct... the one originally posted did not work).

So here is your official homosexual voting guide:

Eats
Overall Restaurant: There are three that I'll suggest. Palomino's because of the tres gay staff they tend to have; Honey because they are auspiciously located across the street from BronZ and Bullfishes, and I always see lesbians in there on dates; Melt because it's in Northside... and that's about it :-). My recommendation: Palomino's.

First Date Restaurant: Honey, hands down. Though I have never been on a date there, I see people in there on their first dates all the time. And then they wander over to BronZ where they proceed to destroy any chance of a relationship by getting drunk and going home together. Cheers to all of you for providing me with entertainment.

Restaurant with a view: Palomino's (see above).

Restaurant with live music: Blue Rock Tavern. Again, a Northside choice. But, more importantly, they are really gay friendly. When we were promoting the November 15th protest, Blue Rock Tavern's crowd was more friendly that the gay bars we went into.

Breakfast: Anchor Grill. Located down the street from Yadda Club, and one of the few greasy spoons open 24 hours, it turns into a gay bar once the bars close. Their goetta is awesome.

(Meal update -- the olive oil-garlic-rosemary chicken concoction I'm coming up with is smelling fabulous. Still waiting to start the au gratin potatoes; they're in a box, shut up.)

Chili (Non-Chain): Camp Washington Chili, hands down. Why is it gay? Because Pizza Delivery "boy" Joe loves it. Anything he does makes it immediately gayer.

Coffeehouse: Sitwell's, where IMPACT Cincinnati meets and local personality, Locke, works. Too bad their service sucks most days... too few people working there, too many people not ordering anything. I would have said Kaldi's because they have always treated us well and the crowd is always awesome, as is the staff, but they closed.

Waitstaff: "If you can't say something nice, don't say anything at all." I don't know most of the restaurants, and the ones I do know don't deserve to be on this list. Go with Anchor Grill.

Wine Selection: Should I know this? HA!

Public Eye
Local Activist: Cameron Tolle. Do you need me to say anymore??? I mean, really, the kids amazing. And he's single, ladies.

Elected Official: Mayor Mark Mallory, for reasons we all know but no one talks about.

Scandal: Can I just say that someone adding Marcus Fiesel on this was sick? And wasn't that two years ago?

Journalist: There are two. Sister Kevin Osborne of CityBeat, who put me on the cover of the magazine. And The Dean of Cincinnati (Jason Haap is listed there, too, I thought they were one and the same) of Cincinnati Beacon. He's on our side and doing more than I am right now for important gay stuff in the city.

(Meal update: the chicken is officially unfrozen. Was I supposed to do that first? Oh, and I think I should have buttered the pan.)

Print Columnist: Joe Wessels, for his work on the Driehaus campaign and making a strong attempt at connecting this blog to our Congressperson to get some questions answered.

Radio Station: WAIF -- Alternating Currents, the gay and lesbian public affairs radio show has been broadcasting out of their Walnut Hills location for years. Thank you, Cheryl Eagleson, for keeping it going.

Radio Personality: Jeff & Jen ... for their drag performance. I still watch that video and laugh.

TV Station: WCPO or WKRC. For their amazing coverage of the November 15th protest.

(Meal update -- looking juicy! Should I start the potatoes now?)

Website: I swear I didn't do this -- I GOT NOMINATED!!! Vote for Queer Cincinnati ... duh. I'll do a separate post.

Blog: I'm not officially endorsing any of them, as most of them are really good friends of this blog. I mean, amazing friends. Wine Me, Dine Me and Cincinnati blog were hugely supportive of the November 15th protest; Locavore is amazing, is a White Knot site, and the oldest friend of this blog; I'm not linked on 5chw4r7z, but he's a good guy. I may "endorse" Montgomery Maxton but only because he's the only openly gay blogger on the list, but everyone on there is amazing.

Jocks
Ha. Sports. Yea, right. I'll let Edro Edro handle that one Oh... but...
Team (Amateur): Cincinnati Rollergirls. Hardcore women fighting to the bruise in a Mad Max-esque game? Yea. I think we'll go with that. And I've known some of the players... a few helped out with the Citizens to Restore Fairness campaign in 2006.

(Meal update. The inside of the chicken is no longer pink!!! Is this actually happening.. an edible, delicious meal at QC's house? No way.)

Place to Buy Lingerie: Somehow, the Pink Pyramid is on the list... that's not lingerie, guys.

Liquor Store: Where else? Jungle Jim's. It's not gay, but I gotta shout out to it.

Out and About
Arts Organization: Know Theatre, because they are a member of the Coalition and actively outreach to LGBT groups, people, and causes. (Even though New Stage Collective -- not nominated -- does more gay themed plays.)
Overall Bar/Nightclub: This a big passing... I know longer consider Club BronZ the best. Though I love the staff and the bar itself, the crowd is young and annoying most nights. So I'm going with... gasp... Below Zero. If you want a cool place, that's where you need to go. If you want a crazy night, you go to Club BronZ. Sorry, Brad and John :-(. I know, I wasn't BZ's biggest fan for a while, either.

New Bar/Nightclub: Please don't vote for Black Finn. I have been to gay bars, bathhouses, and sex parties. None of the above have ever asked me to remove as much clothing as Black Finn did the first night I went in there. Their crowd is also tres homophobic.
Hole in the Wall Bar: Crazy Fox. Never been there, but it's the only gay bar on the list. I would actually prefer the Comet. So, read what you will out of that.

Comedian/Troupe: Barnyard Burlesque, though I wouldn't call them comedy, has some local queer personalities in it. And they're getting really good.

Dance Club: Seriously? Adonis. I love the Dock, but their music leaves something to be desired. And there's very little space. Um.... sorry. I definitely have started growing up when Below Zero and Adonis are my "preferred" locales.

Gay/Lesbian Bar: How about we tackle this separately? Seriously. Otherwise I'll get hit in a driveby.

Happy Hour: Why is the longest happy hour in town -- Subway -- not on this list? Oh right, because it's kinda lame. LOL Go with Palomino's

Home Accessories Store: Metronation, owned and operated by the indomitable George. They are amazing, and have some nifty things in there.

Martini: Below Zero. It's actually the only place I've ever had a martini. I hear Twist's are good too.
(Meal update: potatoes look like they came out of box. Damn. Chicken is almost done!!!!)

Singles Bar: BronZ. I will give it that. If you're single, you can find a boyfriend, a date, a quickie, or an STD there. God knows I have all of the above.

Karaoke: Boswell Alley. Wade is amazing, and Whitney (owner's partner/bar manager) will treat you like a queen, even if you aren't. More importantly, it's the most engaged karaoke night I've ever seen. I've never seen the crowd so into it. It was disturbing.

Live Theatre: New Stage Collective. Have you been? Hello, the staff is FABULOUS. And they are doing shows like Bent and have done already this year History Boys. Very gay. HA!

Movie Theatre: Esquire, for the promotion of Milk.

(Meal Update: Voila! Edible food! Is it any good?) 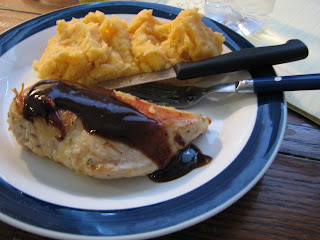 Urban Life
Apartment Complex: The Forum. I'm not joking. It seems like that's the place to be for young somewhat queers and families on welfare.

Church: There are two -- the New Spirit MCC because it's an amazing church (and it's a queer denomination), but I've long since lost contact with them. Mt. Auburn Presbyterian, for it's extraordinary openness and hosting like every gay group in the city -- from CYG to Queen City AA.

College/University: You'd think Miami would be a shoe-in, wouldn't you, coming from me? Maybe. In fact, I'll say yes. Xavier is a close second because of their support of the November 15th protest, and their non-action on Cameron being out there and a Xavier junior on all of our material. LOL. UC, btw, has had some secret and quiet issues with LGBT people, but I've been asked to not say anything about it. I know, I'm respecting their decision.

Festival: Gay Pride is not on the list. Hrm. Squealin With Pride, sure. Meanwhile, Northside's 4th of July Parade is, which is a fun and excellent adventure for anyone ... and may be more exciting and better attended than Pride, anyways.

Neighborhood: OTR. It's the new gay district, actually. We move in, we make it fabulous, then we move on. We tried with Northside to little success :-).

Place to take a visitor: Seriously, "Touchdown Jesus on 75" was nominated. Vote for it. I want to see it get award as the Touchdown Jesus.

Romantic Hideaway: "My House." I think it should win out of creativity. But I wouldn't call it exactly romantic here. Unless the smell of kitty litter turns you on...

Use of Public Funds: I don't think it's fair to put the streetcar on there. It isn't even approved yet. How about the Banks?

That took a long time, but I was cooking and eating too. And now I have a mess: 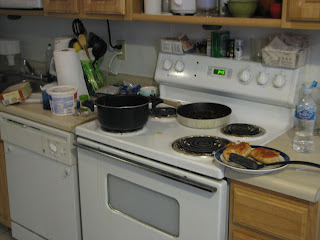 But it's not that bad.

Seriously, though, folks, now that I just handed you a list, you have to go vote. I will seriously be upset if you don't. If you have other ideas or want to correct my information, call me an alcoholic jerk, etc. just write below in the comments section. If I missed something, tell me.

Thanks for the run down!

I'll be voting for you!!

Uh, could you explain this?

"I should be saying Joe Wessels because of his work with the Driehaus campaign, but I'm salty bitch. But, he's still mostly on our side."

I ain't mostly anything. I'm all the way on your side, if "on your side" means "gay rights" and "equality for everyone."

It's not clear what you are saying there, so maybe I'm overreacting, but I was greatly offended by your comment - if it was intended as I took it.

I'm sorry if there was any perception that my personal stances were anything but what I have stated here.